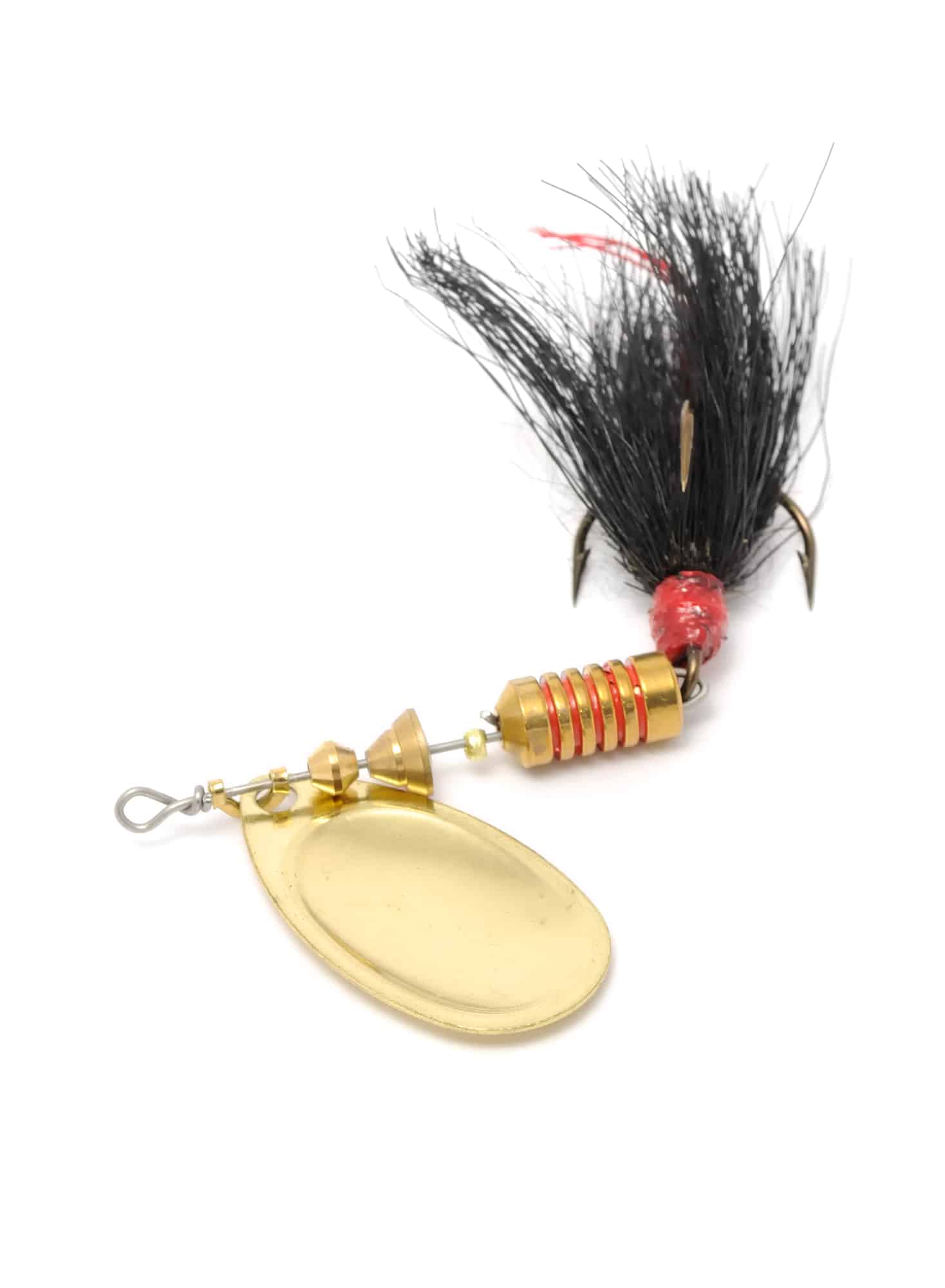 Rooster tails, also known as inline spinnerbaits or spinners, are a classic lure that can be used to catch many fish species. Let’s look at how to rig a rooster tail for trout.

Rooster Tails, also known as inline spinners, are great for catching trout. Trout bit better when they see bright colors. Some fish prefer reds, some blues, others greens or yellows. But if you want to catch trout, you can’t go wrong with lures that use reds, blues, or greens.

Spinners are great for catching fish. But if you want to catch trout, you should use smaller spinner weights. A weight between 1/16 and 3/32 ounces will work well.

What is a Rooster Tail Lure?

Rooster tail spinner lures are a very useful type of lure for anglers. The lure features a rotating blade and a bright-colored hackle that attracts fish. The lure usually works well because of the combo of the spinning blade and vibrating tail.

There are several different ways to use a rooster tail lure.

How to Use a Rooster Tail Lure

Rooster tails are very effective when fishing. Their color attracts fish, and their vibration makes fish strike. They are a tried and true lure that work for many fish species.

I love fishing with inline spinners because they are a no-brainer to use. All you need to do is cast it out and reel it back. They are also suitable for beginning anglers since they don’t require much expertise to use.

How To Fish with Rooster Tails

Roosters tails are great for casting in lakes and ponds and trolling in rivers and reservoirs. Use larger spinnerbaits for lakes and ponds as these lures won’t be able to go as far, which is acceptable for smaller bodies of water.

Spinners are lures used to attract fish. Fish are attracted to them because of their size, color, flashing, and vibrations. Spinner blades create sound waves in the water that attracts fish.

Weighted inline spinners can be fished any way you want them to be fished. There are a few methods which are preferred thought which is the cast and retrieve, trolling, and jigging.

This is the simplest of methods for fishing with a rooster tail or inline spinnerbait. You simply cast out the bait and reel it back.

You don’t want to just throw the lure anywhere though, cast the bait where you think the trout will be located. Be aware with the exposed hooks on these lures that hang-ups are a good possibility. Alternate retrieve speed between a steady retrieve and a slow retrieve to give the fish something different to look at.

When casting a rooster tail lure, let the current do some work by letting the lure drift downriver a bit before retrieving it. This makes the lure more likely to hook fish.

Trolling like cast and retrieve is a pretty simple method of fishing a rooster tail type lure. This type of fishing has to be done from a boat or kayak.

The lure is released and pulled behind your watercraft, usually letting the lure anywhere from 20 -50 feet behind your boat,

Alternate your speed based on water temp, go slower in colder water and a little faster in warmer waters. Fish need to be pretty active to catch up and hit a trolling lure.

Jigging is also a fairly easy method of fishing an inline spinner or rooster tail. You release the lure generally at the side of your boat or kayak and let the lure sink to the desired depth. You then lift and lower the lure but lifting and lowering your fishing rod. Pretty simple right.

Jigging is good for fish that are hugging the bottom of lakes and ponds in warmer or cooler parts of the water column. It is also productive when trying to tempt fish located on humps when fish are schooling together in deeper water.

Rooster tails come in a variety of weights and sizes.

Smaller ones work well for brook trout and rainbow trout. Lightweight spinnerbaits are easier to cast. Use smaller inline spinners in small ponds or streams.

Bigger baits work better in bigger waters rivers and lakes. These larger baits are good for jigging and trolling.

Baits with smaller weights don’t sink to the bottoms of lakes and rivers as fast as larger counterpoints. Don’t use light line when fishing for trout. Use heavy lines instead.

If you are fishing in faster current or bigger water you will want to have a heavier inline spinner. The extra weight helps you fight the current and allow you to reach deeper depths faster.

Rooster tails are small willow blades that produce disturbance and a bit of color as the spinning moves through the water.

Most of them feature blades that produce good flash as the baits move along. They seem to perform best in clean water as the sunlight reflects off the blades making it easy for trout to see and respond to the baits.

Blades are used to imitating the movement of a baitfish. These blades reflect light and make them visible.

When fishing deep or murky water, the blades vibrate and create sounds that attract trout. Often lures intended for murky water or low light fishing are designed to vibrate more and are usually a dark color or not shiny surface.

Hackles are used to add extra body and substance to spinners. Inline spinners are usually made up of two parts: the head and the shank.

Hackles are attached to the shank. The hackle looks like a piece of hair that covers the entire shank. Hackles are usually made out of feathers, but some people use artificial materials such as plastic and nylon.

When fishing clear water you are going to want to use a lure whose hackel is a brighter color. Overcast days require dark or solid colors.

Fishing in muddy water, you should use a dark-colored lure like a solid blue or a black lure. Slow your retrieve way down so the fish can see the lure more easily.

Summing Up How to Rig a Rooster Tail for Trout

In conclusion, we hope you learned something new today by reading this article. We’ve provided you with many different ways to rig a rooster tail for trout fishing. Whether you are casting and retrieving, jigging, or trolling your rooster tail, the rooster tail has proven to be a timeless lure that catches trout as well and much other game fish in both fresh and saltwater.